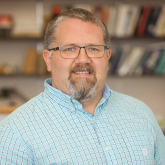 Jeremy joined the staff at Cornwell Architects as an Associate Designer Draftsman.  He has lived in Michigan since he was a child and has been working and raising his family in Traverse City since 2001.  Jeremy attended Northwestern Michigan College where he earned an Associate Arts Degree and then Lawrence Technological University where he earned his Bachelor of Science in Architecture.  Jeremy has experience working summers in college as a carpenters apprentice as well as his twenty plus years as a CAD draftsman/designer and project manager for commercial and residential projects. Jeremy is an Associate AIA member and has extensive knowledge of both residential and commercial building codes.

In addition to his role at Cornwell Architects, Jeremy is a busy husband and father of three children. He enjoys computers, technology and tinkering with antique American Motors Corp cars.